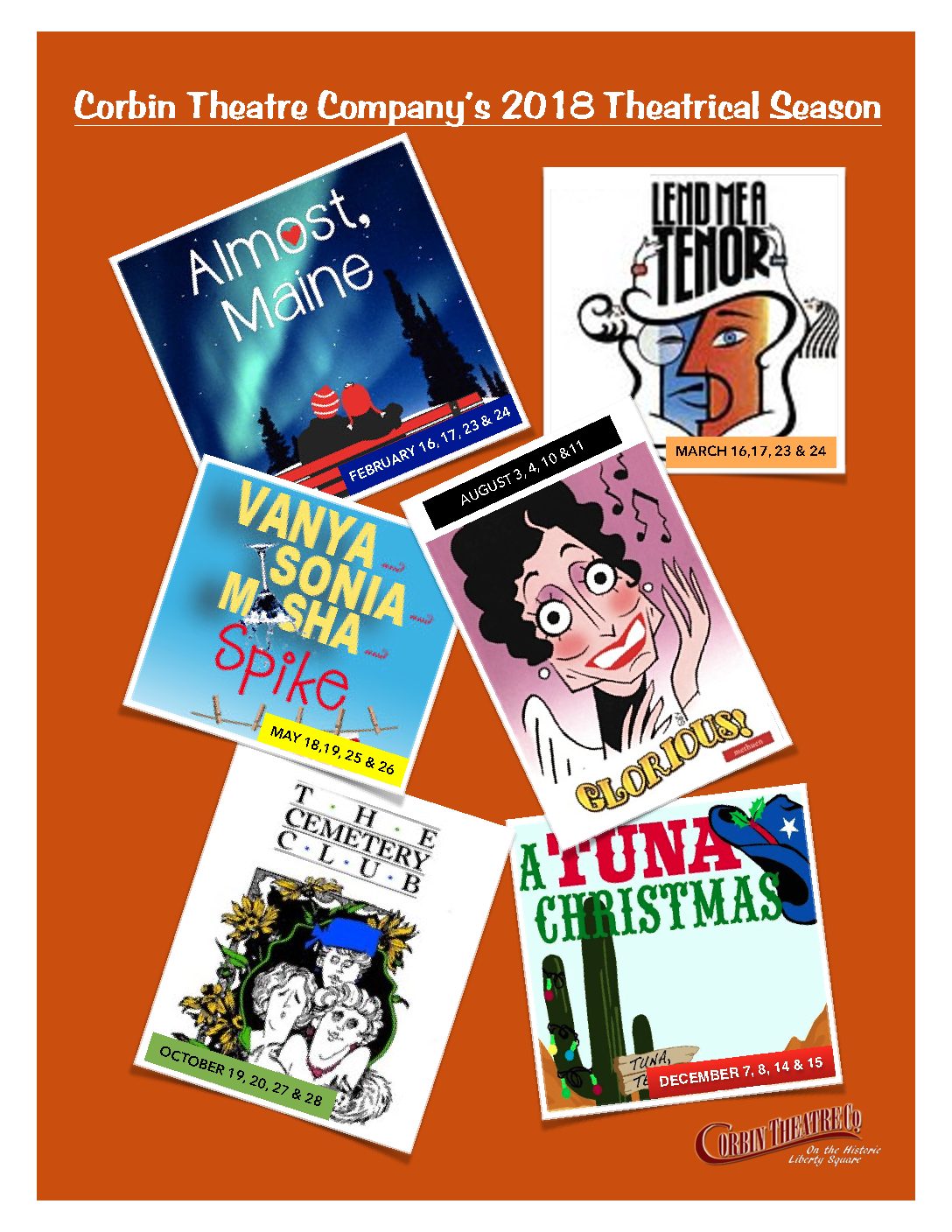 Corbin Theatre is proud to present our new 2018 series.  We are looking for six awesome Directors to make these plays come to life. There is a stipend for hired directors.  Thank you for your consideration in advance.  Please contact our Director of Theatre Kimi Worstell Laabs at [email protected] or Jane Boswell at [email protected] if you may be interested.

A woman carries her heart, broken into nineteen pieces, in a small paper bag. A man shrinks to half his former size, after losing hope in love. A couple keep the love they have given each other in large red bags, or compress the mass into the size of a diamond. These playful and surreal experiences are commonplace in the world of John Cariani’s Almost, Maine, where on one deeply cold and magical Midwinter Night, the citizens of Almost — not organized enough for a town, too populated for a wilderness — experience the life-altering power of the human heart. Relationships end, begin, or change beyond recognition, as strangers become friends, friends become lovers, and lovers turn into strangers. Propelled by the mystical energy of the aurora borealis and populated with characters who are humorous, plain-spoken, thoughtful, and sincere, Almost, Maine is a series of loosely connected tales about love, each with a compelling couple at its center, each with its own touch of sorcery.
**Casting note: Almost, Maine was written with the intent to allow doubling, and can be performed by as few as 4 actors (2 Male, 2 Female), however the playwright encourages flexibility in the ensemble, and the play can be performed by as many as 19 actors (10 Male, 9 Female.)

LEND ME A TENOR
Ken Ludwig

On a very important night for the Cleveland Grand Opera Company, Tito Mirelli, the world-famous Italian tenor, is set to perform the starring role in Otello. Henry Saunders — General Manager of the company — is beyond stressed about everything turning out right, and insists that his assistant, Max — a nervous, young fellow and secret tenor extraordinaire — watch over Tito’s every move to ensure smooth sailing. After a huge fight with his fiery, Italian wife Maria, Tito receives a double dose of tranquilizers through a series of mishaps. Throw in Diana, an ambitious, female co-star; Maggie, Max’s giddy girlfriend; Julia, a flirty head of the opera guild; and a meddling bellhop fighting for Tito’s attention. Together, you have a recipe for comedic disaster. Max navigates the company through one catastrophe after the next — an angry wife, a presumed death, crazy costumes, secret sex romps, and loads and loads of slamming doors and mistaken identities — and, ultimately, takes on the role of Otello to great effect. Together, Max and Saunders find a way to save the Opera Company’s big night in grand, farcical fashion.
Note: This play uses blackface for comedic effect through mistaken identity. While it is not meant to comment in any way on race, and the setting of the play is in the year 1934, it may be perceived as offensive in our modern era. Consideration should be given as to whether or not the company wishes to include this bit, or find a way to cut it from the production.

Chekhov is alive and well in Bucks County, Pennsylvania, where adult siblings Vanya and Sonia reside in their old family home, mourning their lost dreams and missed opportunities. When their often-wrong, fortune-telling maid warns of impending dangers, and their movie star sister, Masha, arrives unexpectedly with young, sexy, boy toy, Spike, the family is launched into a rollicking weekend of one-upmanship, exposed nerves, and a lot of broken mugs. With wit and absurdity, Christopher Durang’s Vanya and Sonia and Masha and Spike blends Chekhov’s famous ennui with the modern-day toils and troubles of celebrity, social networking, and age into a laugh-out-loud comedy that will tickle your funny bone and stimulate your mind.

Hilarious comedy of the worst singer in the world In 1940’s New York, the performer who everyone wanted to see live was Florence Foster Jenkins, an enthusiastic soprano whose pitch was far from perfect. Known as ‘the first lady of the sliding scale’, she warbled and screeched her way through the evening to an audience who mostly fell about with laughter. But this delusional and joyously happy woman paid little attention to her critics, instead she was surrounded by a circle of devoted friends who were almost as eccentric as she was.
Based upon a true story, the play spins from Florence’s charity recitals and extravagent balls, through to her bizarre recording sessions and an ultimate triumph at Carnegie Hall in this hilarious and heart-warming comedy.

Three Jewish widows meet once a month for tea before going to visit their husbands’ graves. Ida is sweet tempered and ready to begin a new life; Lucille is a feisty embodiment of the girl who just wants to have fun; and Doris is priggish and judgmental, particularly when Sam the butcher enters the scene. He meets the widows while visiting his wife’s grave. Doris and Lucille squash the budding romance between Sam and Ida. They are guilt-stricken when this nearly breaks Ida’s heart.

A Tuna Christmas is a broad comedy set in the fictional town of Tuna, Texas. The plot centers on the town’s annual Christmas Yard Display Contest, won 14 times in a row by Vera Carp. A mysterious “Christmas Phantom,” known for vandalizing the yard displays, has the contestants on edge. Among the subplots are Stanley Bumiller’s attempts to end his probation and leave Tuna, Bertha Bumiller’s struggle to hold her family together at Christmastime, and Joe Bob Lipsey’s fight to mount successfully his production of A Christmas Carol despite the town controller of the electric company threatening to turn the lights off. The play is both an affectionate commentary and withering satire of small town, Southern life and attitudes. A Tuna Christmas is the second in a series of comedic plays set in the fictional town of Tuna, Texas. (The play is preceded by Greater Tuna and followed by Red, White and Tuna and Tuna Does Vegas.) Two actors play all 20 zany characters.